Along with the arrival of 2018 came super cold temperatures in many parts of the country. When we were getting ready to leave the parents’ house on New Year’s Day after dinner when it was 19 degrees out, my mother casually mentioned to warm up the car before driving home. 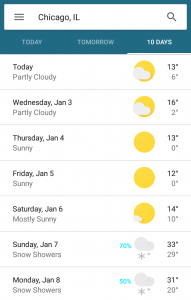 In winter mornings when you are driving out of the neighborhood on the way to work, it’s not uncommon to see other cars idling in their driveways, smoke billowing out of the tailpipe in the frigid air with the drivers nowhere to be seen. Some people even install remote starters so they can start up their engines without even stepping foot out the door. Before my mother retired, she’d warm up her car for over 10 minutes some mornings before work.

Why Do People Warm Up Cars?

People give all sorts of reasons why their cars need to be warmed up. These include:

It turns out in modern vehicles, the practice of idling your car during the winter is no longer needed. In fact, most manufacturers and auto experts recommend driving off gently after about 30 seconds.

So where did this myth that you need to warm up your car come from? It actually isn’t a myth. Before the 90s, many older cars had carburetors and the engine needed to be warmed up otherwise they would stall out when people pulled up to a stop sign because it was not getting the proper fuel-air ratio. It must have been really annoying in the mornings at intersections back then.

Why Idling Is Actually Harmful For Fuel Injected Cars

On most cars with fuel injection, which are most cars on the road these days, by letting the car idle, you are actually hurting the engine, wasting gas, and polluting the environment.

Fuel injection and improved motor oils such as synthetics got rid of the need to warm up cars for a long time. With electronic fuel injection, the car’s computers and sensors can control how much fuel is needed to keep the engine running smoothly and efficiently, and synthetic oil will continue to flow well below zero.

The normal operating temperature for most engines is about 195 to 220 degrees Fahrenheit. The engine will warm up the fastest when there is a load placed on it, which comes from driving it. This does not mean immediately flooring it to redline and leaving a trail of melted rubber. Driving it easily the first several miles will do it.

In cold temperatures, the metal in the engine contracts. An idling car takes longer to warm up, so the metal in the engine takes longer to expand until it reaches its design tolerances. With the extra fuel being used at startup and a cold engine, the unburnt fuel ends up washing off the oil from the cylinder walls along with ending up past the piston rings where it dilutes the oil in the crankcase.

Over the long term, excessive idling ends up causing shortening the life of the engine and engine oil. This is the complete opposite of what people who are warming up their cars are trying to avoid.

The Financial Costs of Warming Up Your Car

When your car is sitting parked in your driveway or garage while idling, you are getting a really lousy zero miles per gallon. Two minutes of idling uses up the same amount of fuel to drive one mile. You are literally turning money into smoke.

The Department of Energy reports that U.S. vehicles consume more than 6 billion gallons of diesel and gasoline a year from idling.

Another study by Oak Ridge National Laboratory estimates that an hour of idling in a heavy-duty diesel vehicle burns 1 gallon an hour. A gasoline passenger car will burn between 0.2 and 0.5 gallons per hour.

At the current average price of $2.49 for a gallon of gas, someone warming up their car for about 10 minutes a day, 5 days a week before work for the 3 months of winter will end up idling for about 1 hour every week. This will end up wasting between 2.4 and 12 gallons of gas depending on the size of the engine at a cost of $6 and $30.

While the car is idling and slowly warming up, the catalytic converter isn’t eliminating all the harmful emissions from the exhaust. Your tailpipe will be spewing harmful pollutants into the environment as it warms up.

Many of these pollutants have been linked to asthma, heart disease, chronic bronchitis, lung cancer, breast cancer, and lower cognitive development in children. Imagine the amount of pollutants that may end up in your home if you are warming up your car in the garage even with the garage door open.

In addition to the health risks, the EDF states that for every 10 minutes of idling, your car generates one pound of carbon dioxide into the atmosphere. CO2 emissions is a major cause in global warming and climate change.

Other Considerations Against Idling

If you live in certain states and jurisdictions, there are laws against idling. You could be subject to costly fines if caught doing so.

You might come out to find your car missing because someone has taken your car for a joyride while you were inside your house drinking coffee if you left your car running with your keys in the ignition.

Even though your engine and inside of your car may be warm after letting your car warm up for 10 minutes, you could still do damage if you don’t drive it gently upon leaving. Other parts of your car such as tires, wheel bearings, transmission, differentials, etc will still be cold and not up to operating temperature.

Some Things You Can Do For Better Winter Fuel Economy

One of the most aggravating things about winter is spending time outside in extremely cold temperatures scraping ice and snow off your windows and car. If you have a garage that is full of useless junk, clean it out. Park your car back in the garage where it is warmer. Your car will take less time to warm up when it hasn’t been sitting outside in the cold overnight and your windshield will be frost-free in the morning.

Check your tire pressure if you haven’t done it recently. Tire pressures decrease in colder temperatures, increasing your rolling resistance.

Combine trips so you are driving less often with a cold engine.

If you live in places where it gets down to the single digits or colder, consider getting an engine block heater. Plugging it in up to 4 hours before you start the car would preheat your engine oil, antifreeze, and internal engine components, resulting in less wear and tear.

In today’s cars with fuel injection and computers that control the idle at initial startup, there is no need to warm up the engine for long periods of time. Start up your car, wait about a minute or so and drive away gently for the first several miles. Your car will get up to operating temperatures faster and more efficiently.

Your coolant will also heat up faster from being driven, giving you heat faster for warming up the cabin. If your dad can walk five miles to school in the snow, up hill in both directions while barefoot when he was young, you can definitely sit in a cold car for a few minutes while it gets warm.

You may have notice on a cold startup, your car’s idle will be higher than normal. This is your car’s computer sending extra gas to your engine to warm everything up faster. In my car’s tachometer, it will spike up to almost 2,000 RPM and then slowly decreases as it warms up. In a minute or less depending on the ambient temperature, it will stop dropping and settle at around 1,100 RPM. This is when I will put the car into gear and get moving.

How long do you warm up your car in the morning? If you warm it up for over 5 minutes, why? What is your car warm-up routine in the winter?