Long answer: There is something about all those zeros appearing on the odometer that makes people think their car is going to blow up on them in any moment. Even my own mother is guilty of this, recently mentioning during dinner that their Toyota Corolla has almost 100,000 on it and it was becoming less reliable. A Toyota, of all cars! This came up because that little check engine light popped on when she was driving it one day and she immediately turned around and went back home.

I get it though. In my parents’ time, they had owned cars from the 70’s and 80’s, where making it past 100,000 miles wasn’t without lots of time spent in the shop or on the side of the road. One of the cars my father owned was a Ford Pinto. Yes, the same Pinto that’s notorious for combusting if it ever got rear-ended. If the car didn’t go out in a blaze of glory, Ford probably didn’t expect it to make it to 100,000 miles anyways because the odometer only had five digits.

But as car manufacturers got better at building cars and things like motor oils have improved, it has become more common for cars to hit 200,000, 300,000, or even 400,000 miles. In fact, there was a ’07 Toyota Tundra that hit a million miles after spending 9 long hard years on the road. After Toyota got it back, they tore it down and found that it could have easily kept on going for many more miles.

Of course, you don’t need to take just my word on it. Here are some quotes from other sources:

“We have tested our newest breed of EcoBoost engines in our F-150 pickup, for 250,000 miles. When we tear the engines down, we cannot see any evidence of wear”, Jagadish Sorab, tech lead of engine design at Ford

“Every new car today is built to last a quarter of a million miles”, Mike Calkins, manager of technical services at AAA 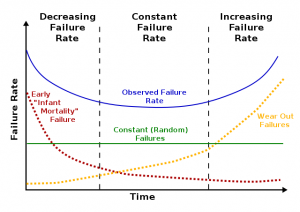 There is a theory called the bathtub curve that shows the typical time versus failure rate for the reliability of mechanical things such as a car. The bathtub curve has three zones.

The first zone is the infant mortality period where things break because of a quality problem with the components or design. When you buy a new car, it will usually come with something like a 3-year or 36,000 mile warranty to fix any initial problems.

If a car makes it past the first zone, it will be in the middle of its life, where the failure rate is low and constant. This is the sweet spot for the smart and frugal car shopper. If you are able to find a slightly used car where someone has already taken the initial depreciation hit, and if there are maintenance records showing that it was well maintained, you are likely to get a car that can keep on going for many thousands of miles with minimal problems.

Eventually the car will enter zone three, where parts start wearing out and failing. To get the most for your money, you would drive a car until the repairs and its unreliability makes it not worth keeping.

By getting rid of a perfectly good car early, you are continually putting yourself into the driver’s seat of a new car that could have new car bugs that needs to be worked out. Or you could be putting yourself in someone’s problem car that they traded-in or abused.

According to the U.S. Department of Transportation, the average American drives 13,476 miles a year. At this rate, it takes most people about 7 years to get to the six-digit mark. Coincidentally, that is about the time many people finish paying off their car loans. Edmunds’ research shows that the average car loan term is now inching past six-and-a-half years and a car’s average trade-in age in 2014 was six years. This tells us that for many people, they are eternally making car payments for a significant portion of their working lives and destroying their financial security through depreciation over and over again when they could be putting that money in the bank or investing it.

Now I’m not saying you shouldn’t buy a new car. My parents have always bought new cars once they could afford them. Since getting rid of his Pinto, my father has bought two other cars. One he kept for 20 years and the other, the Corolla, is now almost 18 years old. My mother had a Honda that was 22 years old. There is some benefit being the original owner and knowing how a car was driven and how well it was maintained. Thomas Stanley, the author of The Millionaire Next Door states on his blog that for every one millionaire that will buy a used vehicle, there are two who tend to buy new.

Some other facts from Stanley’s The Millionaire Next Door and Stop Acting Rich and Start Living Like A Real Millionaire:

So if you want to be rich, you don’t need a Ferrari or Bentley in the garage. You just need to avoid financing a depreciating asset, drive your car until its wheels fall off, and buy something reliable so hopefully that will be very distant in the future.

Not sure what car brands will go the distance? J.D. Power has got you covered. Their 2018 Vehicle Dependability Study ranks the automotive manufacturers by the number of problems experienced by original owners for the last three years in their 2015 model-year vehicles.

As for the Corolla and the check engine light? The rubber seal on the gas cap had deteriorated from old age.

How many miles are on your current car? How long do you usually keep your cars for? For you, which brands of cars are the most reliable?