So you want to be a millionaire but think there has to be a better way than appearing on Who Wants To Be A Millionaire or winning the Mega Millions? Then this blog post is for you.

A seven-figure net worth might seem almost impossible when considering that the average American has a net worth of $68,828 from the 2011 Census Bureau data.

However, consider the Great Pyramid of Giza, which rose almost 500 feet from the desert and built in a time with no machinery to move millions of stone blocks weighing over 2 tons each. When Pharaoh Khufu first came up with the idea, people probably thought that this was impossible too. What made the pyramids possible was that they were built by breaking down an almost unimaginable project into individual pieces.

To make saving up a million dollars seem more attainable, you should do the same thing by breaking down what you need to save into days. This makes a big number seem less daunting.

This doesn’t mean that it isn’t possible to become a millionaire if you are older. When one has just graduated from college and at their first job, it is kind of expected they would have a lower salary and maybe student loans to pay off. When you are older, you may be more established in your career and earning more money to make up for the lost savings.

Check out the chart below showing the savings needed to build a million dollar balance by the time you are ready for retirement at age 65 when starting at zero and a 8% average annual investment return. 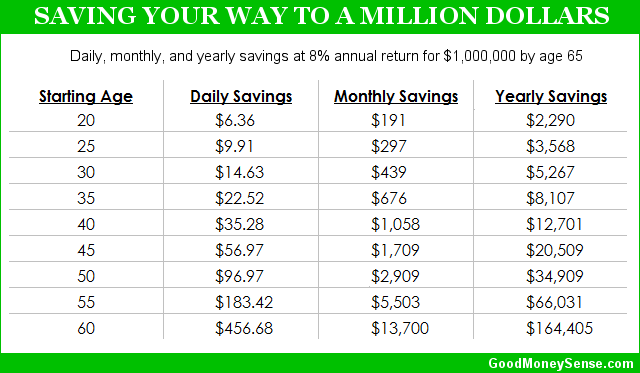 Another thing to consider when saving for retirement is to take advantage of your company’s 401k. If your company provides a matching percentage, that is free money in your wallet. Also, for 2017 the 401k contribution limit is $18,000 and each dollar contributed lowers your state and federal taxable income. This is like the government paying you to save money! The exact amount depends on your tax bracket and state tax rate. Using a payroll calculator, if a 40-year-old in my state saved $12,700 from the above chart in his or her 401k with a $100k salary, they will be paying approximately $4,100 less in taxes, so they actually only needed to save $8,600 of their actual salary. Think about it. Would you rather put that $4,100 towards your retirement or give it to the government?

The important thing is start saving early and stay consistent. Make saving a habit and hitting your retirement goals will become a possibility.

Use our millionaire savings calculator to calculate how long it would take to save a million dollars or any other amount in your situation.